Some of the most influential families to the Angus breed

The Davis family of Rollin’ Rock Angus in Sidney, Montana is arguably one of the most influential families to the Angus breed from both a leadership and cattle breeding perspective. The contributions to the industry are hardly enumerable, as you begin to count the boards of directors served, awards won, and outreach made to fellow Angus breeders to better our breed. Bill and his late father Dale are known for their captivating personalities, they are known to light up a room with both humor and extensive knowledge of the breed and industry. As put by Mark Gardiner of Gardiner Angus Ranch, “Bill has an eternal optimism for the Angus breed.” I think all who have met Bill and the Davis family can attest to the outgoing spirit and enthusiasm they bring to the breed.

It was 1956 in Belgrade, Montana when this legendary ranch was first conceived by Mr. Dale and Betty Davis. Performance testing of cattle was a new concept and they embraced it entirely, making in-herd selections of cattle with economically important heritable traits. Cattle were sold privately until 1971, when the first Rollin’ Rock production sale started. In 1977, Bill and Jennifer Davis purchased Rollin’ Rock Angus, and in 1993 moved the ranch headquarters to Sidney, Montana.

Rollin’ Rock Angus focuses on producing cattle that are rugged, durable, and can handle the terrain of Montana as well as possessing the versatility to adapt to all parts of the country. Calving 600+ cows a year, they are the “Program with a Purpose”, and they have been steadfast in maintaining that purpose over the past 58 years. In 2005 they were awarded the Certified Angus Beef Seedstock Commitment to Excellence Award. Not only has Rollin’ Rock been a consistent supplier of bulls for the commercial cattlemen, they have bred breed-influencing sires and foundation females for decades.

The first claim to fame for Rollin’ Rock Angus was the purchase of the Rito N Bar bull from the N Bar Ranch of Grass Range, Montana. Born in March of 1960, Rito N Bar went on to sire the influential RR Rito 707 in 1967. In 1983, Eriskay of Rollin Rock 3302 was born, becoming a cornerstone foundation female in the Rollin Rock herd. As a two-year old, she calved the influential RR Traveler 5204 bull in the spring of 1985, sired by QAS Traveler 23-4. A paternal brother to Traveler 5204, the breed-altering DHD Traveler 6807 bull would be born a year later in 1986. It was in that same year that the RR Hero 6267 bull would be born at Rollin’ Rock Angus. RR Hero 6267, would become a staple in the pedigree for other herd sires, and stud-quality bulls including his son Hero 6267 of RR 2418, who would then go on to sire the breed altering sire at the turn of the century, HA Imagemaker 0415. Other influential sires bred out of the performance-oriented Rollin’ Rock herd include PAPA Forte 1921, PAPA Equator 2928, PAPA Universe 515, RR Scotch Cap 9440 and RR Scotch Cap 9440 1483.

The Davis family also played a crucial role in the development of the Performance Breeders Bull Sale. Started in 1988, the founding members include Dale Davis of PAPA Angus, Bill & Jennifer Davis of Rollin’ Rock Angus, Dave & Yvonne Hinman of Hinman Angus and John Hamilton of Cedar Hills Angus. For over a decade, the Performance Breeders Bull Sale was one of the leading Angus sales in Montana, and the sale continued with Rollin’ Rock and Hinman Angus until 2008. Leading bulls in the Angus breed were sold through these sales as well as bulls that met the needs of commercial cattlemen across Montana, Nebraska, North & South Dakota and across the country. Many of these bulls were in major A.I. studs leading the breed in maternal, weaning, performance and carcass traits. Behind all good cattle, however, are great cattlemen and stewards of the land. The Davis family is no exception.

Dale Davis had a penchant for performance in his cattle, and that is a legacy you still find today at Rollin Rock. Dale was an active member and former president of the Montana Beef Performance Association, as well as a member of the American Angus Association Board of Directors from 1973 to 1979. It was during his tenure on the Board, that the Association published its first Angus Sire Evaluation Report, established Angus Herd Improvement Records (AHIR) as the basis of national cattle evaluation, established estimated breeding values (EBVs) for maternal traits and launched the Pathfinder Program.

Bill, following in the footsteps of his father, also served as the President of the Montana Beef Producers Association. He served on the American Angus Association Board of Directors for 8 years, serving as President in 2010. The father/son outlook for progressively moving the Angus breed can best be summed up from a quote in the Angus Journal in 2011:

As Dale, who died in 2005, voted to continue the CAB program at a critical juncture in 1977, “not in his wildest dreams” would he have anticipated that Bill would serve as chairman of that same organization as the program — now an LLC with a $17 million budget — celebrated reaching annual sales of 775 million lb.”

The Angus breed owes a lot to the steadfast Davis family of Sidney, Montana. They have provided superior genetics, business oriented customer service and leadership roles in the Angus industry over the past 50 years. While they breed their cattle with the mantra “Program with a Purpose”, I tend to find their true purpose as a patron and servant to our breed, as much as a superior cattle rancher and breeder.

Rollin Rock Angus Genetic Partners produces top quality Black Angus registered herd sires. The sires and their progeny are well-rounded and sturdy-built. Rollin Rock Angus has a long history in producing some of the top bulls in the breed and the legacy lives on through the genetic partnership between Raymond and Son, and Rollin Rock Angus. 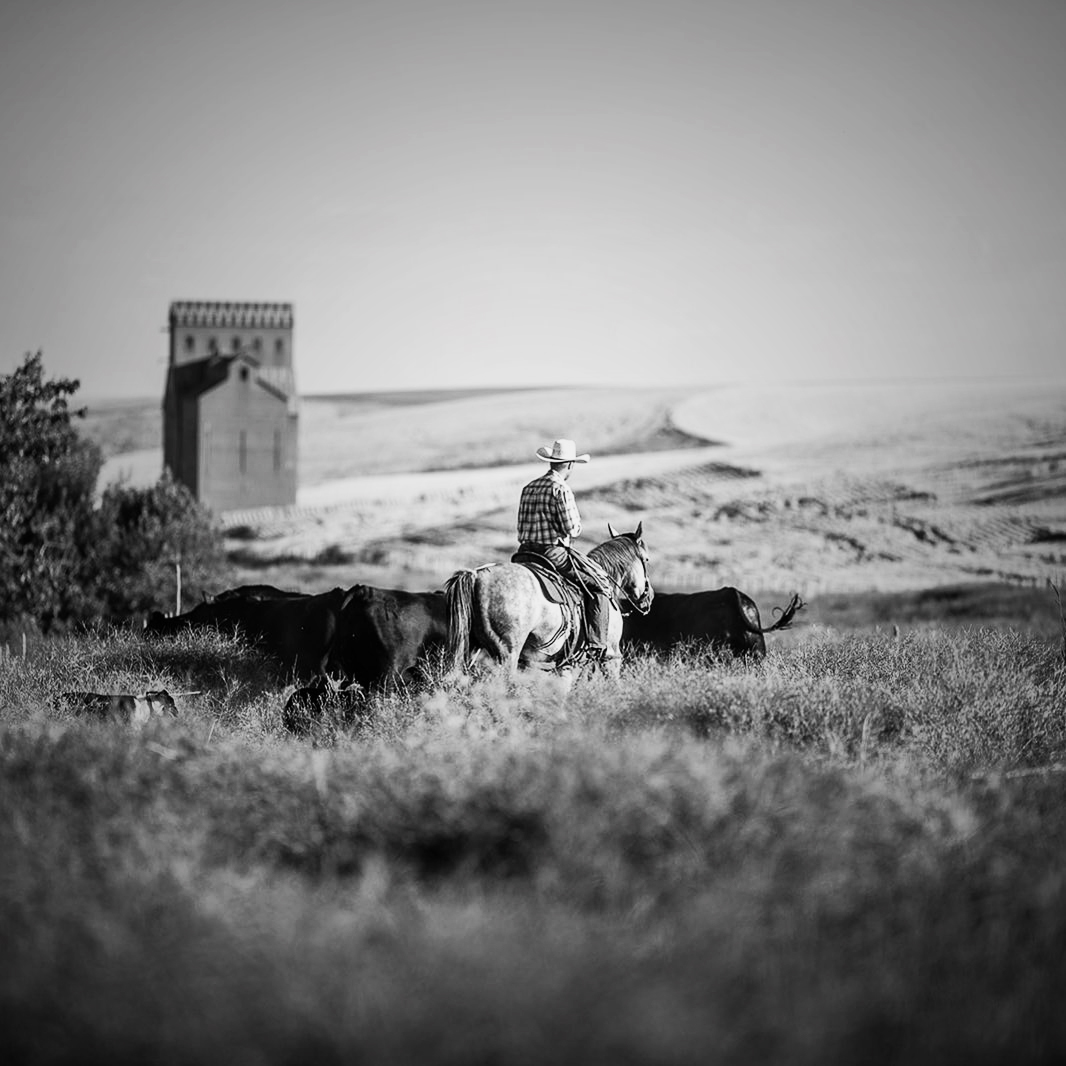 In 1878, Raphael “Fred” Raymond purchased 160 acres of land from the railroad. That purchase, and that homestead, laid the foundation for what 5 generations and 137 years later would be the farming and ranching business of Raymond & Son, Inc. Fred would eventually marry Adaline Sutherland, a native Kansan who made the trek west in a covered wagon at the age of 8. They would have 4 surviving children, the youngest of which would be known both locally and in statewide political circles as Ruff. He was born in 1906, and would take over the farming operation north of Helix in 1934. He and his wife Gladys would have two children, Raphael Royal Jr. in 1928 and Barbara in 1931, both of whom would spend their entire lives dedicated to farming and ranching.

After a 2 year stint in the navy and 1 year in college, Royal returned home to help his father on the farm. He married Wilma Bowman and they had two daughters, Jennifer (Davis) and Becky (Evans), and one son Tony. Royal would oversee the growth of the cattle from a small registered Shorthorn herd that Ruff had started into a predominantly Hereford commercial herd. That herd was limited in size due to summer pasture constraints until 1963, when a grazing lease was obtained from what would become Boise Cascade in Wallowa County. With nearly 20,000 acres of summer pasture, Raymond and Son now had the ability to build their herd to nearly 400 cows. Tony came back to the farm in 1975 and married Peggy Smith shortly after. They had three boys; Ryan, Tyson and Chance.

In 1982 the opportunity to expand the farming operation outweighed the cattle market and all but 65 head of yearling heifers were sold to buy a farm that would ultimately become the home of Royals sister Barbara and her husband Alan. The Boise Cascade lease was lost, and Royal and Tony set to work on building back to the numbers needed to reacquire the lease. They incrementally pieced together portions of the lease starting a few years later. In 1995 the purchase of 125 heifers from the KG Ranch in Three Forks, Montana got their numbers back over 400, allowing the full allotment in Wallowa to again fall under the 3R brand.

In 2002, Ryan came back from training horses in Idaho to help manage the cattle business. Tony had secured another lease on the 83 Ranch in Pilot Rock, OR. This provided additional summer pasture as well as winter calving ground. Raymond and Son, Inc. partnered with Botts Angus and purchased the top end of the 83 Ranch cattle, as well as leased additional cows to hit the numbers necessary to fully utilize the new grass. This arrangement was in place for several years until Raymond & Son could assume the entire lease. Ryan slowly added additional summer pasture as well as calving ground, and the commercial herd grew to its peak of over 700 head in 2013. It was then that the bottom 200 head were sold off to make way for the purchase of 300 head of registered Rollin’ Rock cows.

From 160 acres and a milk cow in 1878 to 1200 acres and a handful of registered shorthorns in 1949 to over 5000 acres, 500 commercial cows and 300 registered today, the Raymond family business has grown to become as much a part of the Eastern Oregon landscape as the wheat that it grows and the calves that it raises. Today Ryan, his wife Amy, along with their two boys Pace and Colter, oversee the cattle program in Wallowa, Helix, and Pilot Rock. Tyson and his wife Kate, with their two boys Uriah and Malachi, farm the wheat and canola.